Help From The Trenches: Where Great Ideas Are Born 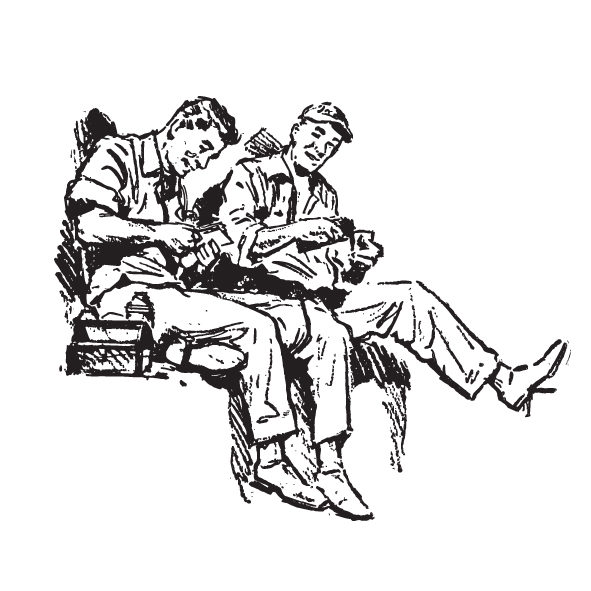 In his book, Rules of Thumb, Alan M. Webber shares a story about the most unlikely place for where your best ideas come. In an illustaration, he references what took place at Xerox, when the company was faced with an economic downturn and preparing to lay off a bunch of tech reps.

Xerox knew it had too many of these staff as they always seemed to have time to stop and have coffee between service calls. But before it pulled the trigger on the reps, it got in touch with John Seeley Brown and asked his advice.

In response, Seely Brown advised Xerox to hire some anthropologists’. That’s right, anthropologists, who would ride around with the reps and see what they actually did.

The reps turned out to be bona fide knowledge workers. They didn’t follow the company repair manuals – they used them to prop open the doors of the trucks. Instead they invented work‑arounds to the problems they found in the field, then shared best practices over coffee. They were technical innovators.

Instead of laying off the tech reps, Xerox invested in communications technology so they could more easily talk to each other, and the company could capture what it heard.

This resulted in design solutions to problems that had plagued the machines for years. And where did the great ideas come from? They came from the guys with the dirty fingernails, working in the trenches.

It is important to place value in your trench workers and what they contribute to your organisation. It is from them that some of your best ideas will come. Here are three observations from the story above that will help you place proper value.

People In The Trenches Are Knowledgeable

The tech reps used company repair manuals as doorstops. They found more practical ways to solve problems. And this is the value of trench workers. Conceptual ideas born in your board room are only as good as the ability of your team in the trenches to perform them.

Hortense Canady said, “If you don’t realise there is always somebody who knows how to do something better than you, then you don’t give proper respect for others’ talents.”

As you respect the talent of the people who make you shine, you will increase your level of performance in more tangible ways. Are you asking for ideas from your people in the trenches? Some of the best ideas your company has will come from them.

People In The Trenches Are Communicators

The stops at the coffee shops were not spent in idle conversation. The tech reps were exchanging best practice ideas that would improve the quality of their work. What a novel idea. Here is the painful truth – those closest to the front lines often know more than you do. It is when you embrace this fact and listen to them that you can become a
better leader.

The challenge for leaders is to listen to your people, in their language. It’s not the burden of your people to know your language and every managerial issue, but if you want to grow your company you will make it a priority to understand theirs. Are you listening to them?

People In The Trenches Are Innovators

It was when the leaders at Xerox discovered the ideas from the techs that they solved design problems that had plagued them for years. The frustrations at Xerox were erased when the right innovators in the trenches connected with the right leadership at the top.

Innovators in any organisation are invaluable. It is when you discover them among your own ranks that it can make a significant difference. Helpful ideas are within your reach when you appreciate that they can come to you from places and people you might have overlooked. Meet them at Starbucks. It could be the most profitable cup of coffee you buy.