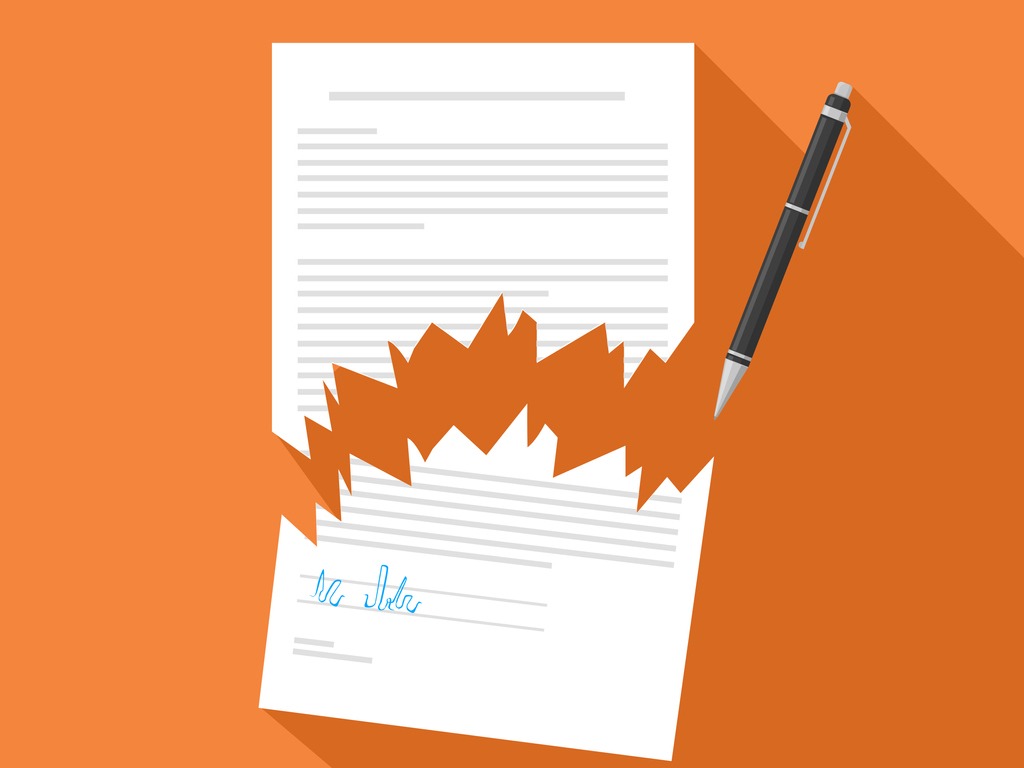 Navigating the exit of a contract can be challenging. Katarina Morgan explains the options available

In May 2022, the UK Home Office said it had ‘cancelled’ a Border Force contract with P&O after the ferry operator sacked nearly 800 employees. The focus was on job losses, but the language used is equally important when two parties consider ending a contract agreed between them.

Generally, once a contract has been agreed it becomes binding and the parties will be legally bound to perform according to the contractual terms and conditions. However, as in the P&O example, circumstances can quickly change and impact any contract. If one party feels a contract is not being upheld, depending on the type of breach, they have a number of options.

The aggrieved party could affirm the contract and claim damages, try to terminate the contract, or want to cancel the contract, which is known by the legal term rescission, depending on the circumstances. It will also depend if the terms are classed as ‘unfair.’

But how exactly do these actions vary and what will the impact be on the parties involved?

Terminating a contract will require either or both parties to meet the obligations within the contract (such as confidentiality clauses or restrictive covenants) and essentially brings the contract to an end to put the parties in the position as if the contract had taken place.

By following an express termination clause in the contract and giving notice to the other party, the contract can be terminated. Termination clauses can sometimes be unilateral and depending on the wording of the express clause and the circumstances, this could create an unfair contract term argument.

Contracts will, however, often contain provisions for termination in specified circumstances, such as material breaches, or one of the parties to the contract changing control. In addition, parties enjoy common law rights of termination, unless these have been specifically excluded within the contract.

Each case must be assessed on an individual basis to ensure ‘reasonable notice’ is given.

Terminating a contract does not always have to take place because a party is in breach. It can happen if one of the parties has become insolvent or simply wants to bring the contract to an end.

Before terminating a contract, parties should consider whether they need an ongoing relationship and if they do, renegotiating the contract, varying its terms or working through a dispute escalation procedure to find a mutually agreeable solution might be more prudent.

By contrast, rescinding a contract means both parties are restored to the position they were in prior to the contract – it is as if the contract never existed. Therefore, it removes the parties’ obligations under the contract.

Rescission is an equitable remedy against a party that has committed a breach of contract, usually for misrepresentation or mistake, but is only applicable if the contract has not been affirmed.

Affirming a contract refers to the continued application of contractual terms after a repudiatory breach has occurred, with the sole intention of claiming damages in light of that breach.

A repudiatory breach of contract takes place when one party fails or refuses to perform a fundamental term or condition of the contract.

The other party can either

The circumstances will usually dictate the best option for the party not in breach.

This is just one reason why action to rescind a contract must be prompt once a sufficient breach has been noted, as any delay could allow the other party to argue the contract was affirmed and the chance to rescind has been missed.

To rescind or affirm?

Because rescinding renders a contract retrospectively non-existent, the innocent party must consider the best outcome, which could include valuable property being returned to them.

Rescission will not be found valid by the Court if the Court believes the contract was affirmed, if a third party has acquired rights to any property subject to the rescission, or if it is impossible for the parties to be restored to their positions prior to entering into the contract.

Both sides of the transaction must be returned to their original position for a contract to be rescinded, which may prove challenging because the nature of the business or the property involved has been destroyed or substantially altered.

The circumstances, therefore, must be analysed before a decision is made to exercise rescission as it cannot be undone.

The starting point on unfair contract terms is to ensure they are drafted and checked carefully, so they cannot be considered unfair in light of the relevant legislation.

The parties must consider whether or not the contractual term is automatically unfair; for example, attempts to exclude the implied terms as to the quality of goods or digital content, or to exclude liability for death or personal injury caused by negligence, will be automatically unfair and in breach of the legislation.

Depending on the contracting parties (B2B or B2C), the next step is to evaluate whether the terms are fair or not. All terms in consumer contracts and notices must be transparent. Any lack of transparency may indicate unfairness and any unfair term will be non-binding on consumers.

With B2B contracts, the law respects freedom of negotiation and businesses are free to enter into whatever contracts they see fit. There is therefore no general fairness or transparency test, businesses must ensure they are comfortable with the contract terms and their commercial implications before signing them.

However, there are a few arguments that a business could explore to invalidate or tone down the effect of a term that appears unfair, by considering the ‘reasonable’ test.

The legislation states a contract term must have been a “fair and reasonable one to be included having regard to the circumstances which were, or ought reasonably to have been, known to or in the contemplation of the parties when the contract was made“.

This means each case will be fact specific, but the Court will consider the circumstances in which the contract was entered into, the size and weight of the parties and whether they took legal advice/had solicitors prepare the draft contract.

Navigating the exit of a contract can be challenging, especially if it depends if one of the parties is in breach or not and whether a term is also unfair or not.

It is not something to be undertaken without expert legal advice, as getting it wrong, could be catastrophic for the continuation of a business, from a financial and reputational perspective.

It is critical that organisations understand the difference between rescinding (cancelling) or terminating a contract, and the circumstances in which those options can arise.

What is Conversational Commerce?