Samoa – the End of an Adventure! 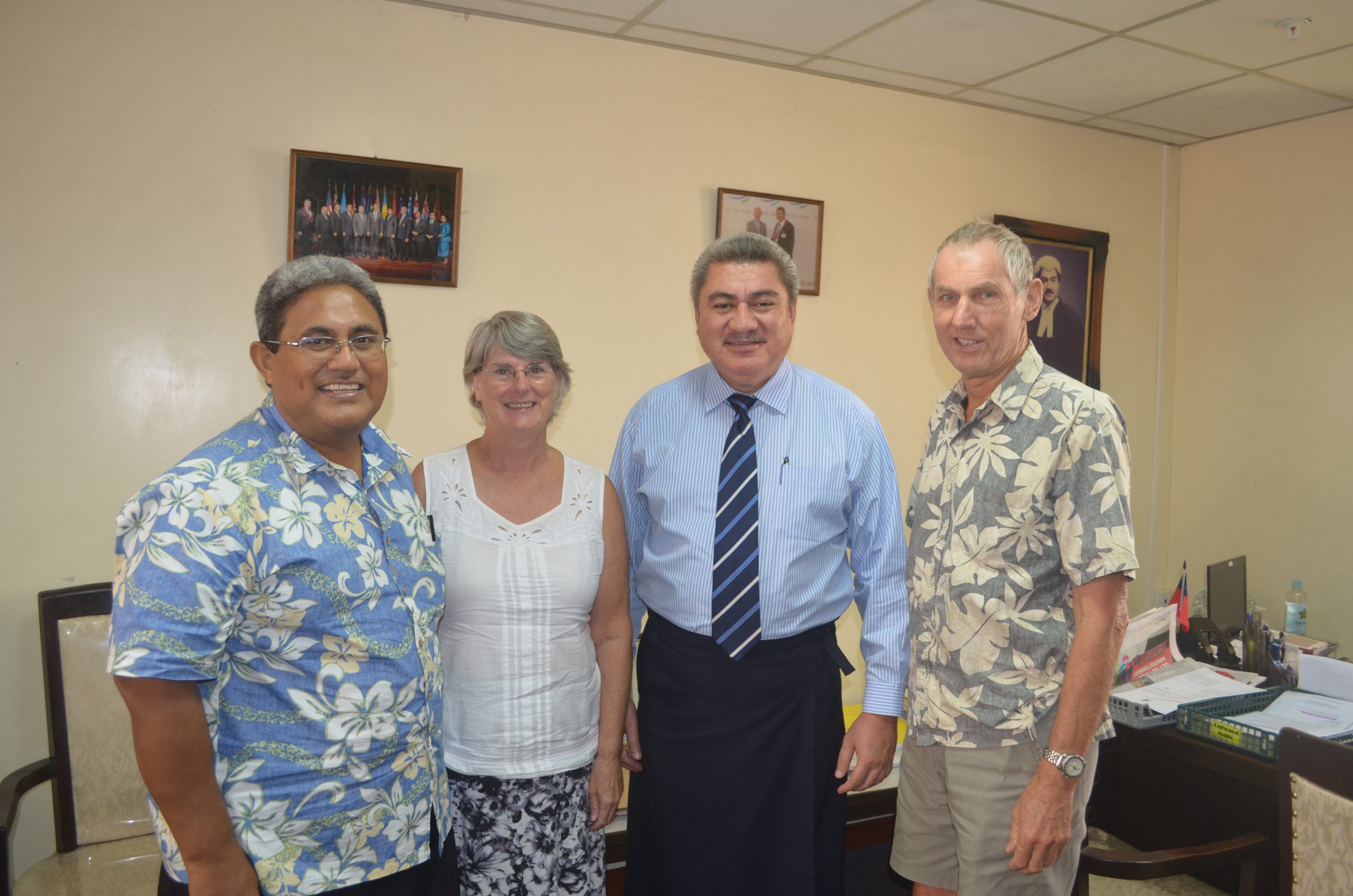 My reactions were confused: one minute it is “I can’t believe it is all over” the next it is “Let’s get this done and dusted, I want to go home!” It was so confusing to feel this way but it indicates to a large extent how my time here in Samoa has been. It has been wonderful, it has been challenging, it has been different, it has been trying, but overall I will miss Samoa. I have learnt a lot in Samoa, particularly about the differences in people and culture – understanding it not just theorising it. I hope I have made just a tiny difference to where I have worked.

Living in a very small country you get to meet many different people but also people who in your own country you may never have the opportunity to meet. We have had two opportunities to meet with people we would not readily meet at home. First I met and talked with the Right Honourable John Key, Prime Minister of New Zealand when he visited Samoa in June 2014. It was good to have that moment to sit and chat with him and Charles says the photograph shows me “pinning his ears back” making the most of my opportunity.

That was followed very recently by the opportunity with our SAME President Tagaloa Eddie Wilson to meet with the Deputy Prime Minister Fonotoe Nuafesili Pierre Lauofo Meredith of Samoa – that does not readily happen at home. As Volunteers in Samoa we were invited to the New Zealand High Commissioner’s Residence to various formal functions – that type of invitation does not happen at home either. These were wonderful opportunities.

Of course I have sampled the delights of Samoa: beaches, swimming, festivals, food and culture. I loved getting back into swimming training, though that was stopped by being sent home and was hard to start again. I loved being able to always dress in light clothing, the lovely balmy evenings, though at times I have struggled with mosquitoes and being too hot!

I really enjoyed our working environment, the relationships we have built and will miss many things. Charles and I have had success with establishing the physical office for SAME here in Samoa. SAME has been incorporated since 1982 so they already had some processes but they did not have a physical office and were run by volunteers, so their systems and processes were somewhat ad hoc and could change with whoever was in the office. We have pulled those systems together and set them up for a more permanent situation. Sustainability of the SAME office and its systems and processes was a particular focus. We have worked with Faith and trained her to run the office once we leave but she is a 23 year old and she has only one year of experience so for her it will be a challenge. We all also know that staff do not necessarily stay in one position and with Faith working primarily on her own this could be a lonely position which might prompt her to consider a change.

One way of providing sustainability is to provide an external control and we have done this through setting SAME up to meet the requirements of ISO 9001:2008 quality management standards. ISO stands for International Standards Organisation. To achieve ISO 9001:2008 an organisation has to be successful in an external audit showing they meet the various criteria of that standard. To maintain the certification, regular internal audits must be undertaken and repeat external audits done at set periods. SAME provides opportunities for the Members to participate in ISO training programmes and certification. Having the SAME office ISO Certified is also about “walking the walk” and not just “talking the talk”; it is about SAME’s credibility.

ISO therefore provides an external motivation for SAME to maintain and improve their systems and processes. This of course has meant that I have developed a lot of documentation and at times I wondered if it was worth it. The first internal audit took place two days before I left and we met the requirements for that with just a few small tasks to be completed. The external audit is due in the third week of November and I will be almost holding my breath while I await the result of that.

What ISO certification means is that all systems and processes are documented and if Faith does ever decide to leave, all the documentation for the next person to take over from her are in place. In addition those things that happen only once a year, for example an Annual General Meeting, have been documented so that Faith has guidance in managing this process in March 2015. Of course being ISO certified means that there are rather more checklists and documents than such a small office might expect to have, but for SAME it is an excellent way of supporting sustainability which was one of our goals for our time here.

Faith at our office became very special to us. Her naming her second baby after me was an honour and is something I will always remember. Faith has until recently been the prime earner in her family, supporting a family grouping of nearly 20 people. Her husband is now earning and two of her younger siblings have recently started work, though they are not yet contributing. Her income levels have been really low with a wage of around US$40/week. She has however learned a great deal in the past 12 months. I recently undertook a review of her position description, noting her increased responsibilities and we did a performance appraisal (something that is seldom done in Samoa workplaces). I was delighted when the SAME Executive Committee approved a pay increase to nearer US$80/week. In addition they have agreed to give her a signed contract for 12 months (again something not often given in Samoa). We feel we have made a significant contribution to Faith’s skills, knowledge, value in the workplace and her wellbeing. That feels very special indeed.

On 22 October SAME held their Members monthly meeting and made it our farewell. It was hosted by Samoa Breweries (who make the very popular Vailima beer) and there was a great turn-out. We weren’t quite sure if it was the free beer or our farewell, however what mattered was that a great evening was enjoyed by all. We both felt quite emotional and really enjoyed our evening. Speeches were brief but the singing of the traditional Samoan farewell song really undid us. SAME gave us gifts of a beautiful carved wooden plaque with an engraved name plate expressing their appreciation for our services – we will hang this with pride on our wall at home. We both spoke, me during the meeting where I encouraged all the members of SAME to recognise that it was their organisation and that they must all be prepared to contribute. How easy it is to do nothing but criticise the actions of those who do the work. Charles spoke in response to SAME’s farewell and I think that was when it all became real.

On our final weekend we participated in a friend’s 50th Birthday Beach party which then became our farewell for our friends too. The beach was about an hour’s drive away and is really lovely, a little cove which is sheltered by a small island in the opening. The water was warm and calm and we spent quite some time just sitting in the water, gently bobbing around and chatting. The Sunday Blue’s Night was something quite unique. Our accommodation and his cafe were so close together that if we didn’t wish to attend the night we could still hear the blues music from our lounge.

We really have had an amazing year in Samoa. We are so glad that we took the opportunity when it arose, we feel we have done what we were asked to do and a bit more, and that our contributions had value to those we were working with. We are planning on going back to Samoa for a holiday in June next year, we have friends there and know the places we want to go to so that meant we were saying “’til me meet again” not “Farewell”.