Errors are not the Enemy! 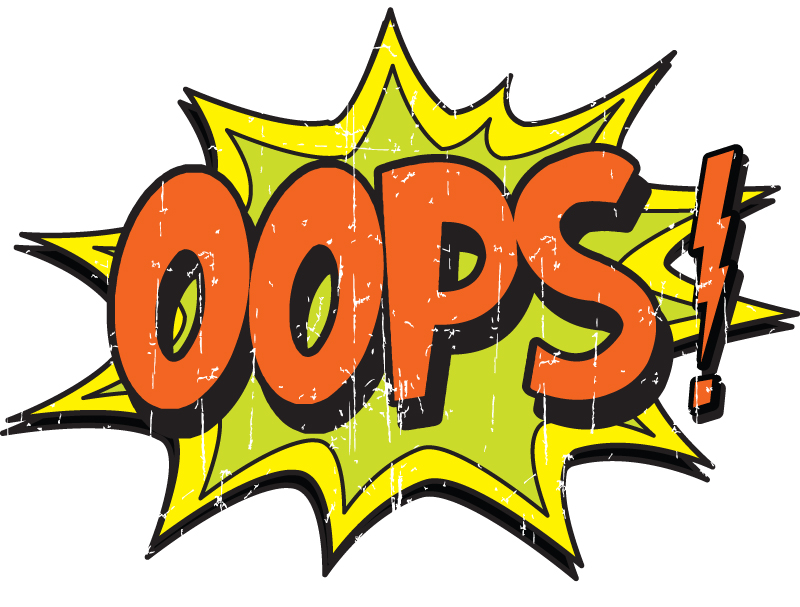 If at first you don’t succeed, learn from it and try again!

If there’s one thing most of us hate to admit to, that we try to hide and put a good deal effort into trying to minimize, it’s our errors. I’ve never really understood why. After all, we’re all human. So, by that very fact, we’re all imperfect, and we all make mistakes. It’s one of the things that binds us all together as the human race – the fact that we all make mistakes. When we make a mistake, the first thing most of us does is either pretend it didn’t happen, blame someone else, or seek to justify it. Some people go in the opposite direction and beat themselves up over it unmercifully, but the majority seeks to minimize the perception of the fault.

The thing about mistakes is that they don’t exist until they have been made, which means that we’re only aware of them by definition once they are already in the past. For this reason you can’t change mistakes, which means that self-flagellation over an error is pointless – it achieves nothing except to make us feel worse by hitting us where it hurts – in pride and self-worth. However, while giving ourselves a hard time over mistakes made is pointless, pretending the mistake never happened or seeking to gloss over it is a missed opportunity.

You may think that sounds crazy but, at the end of the day, our mistakes are one of the best personal development resources we have available! Being actively part of something which didn’t work is a major learning experience if you allow it to be.

Firstly, these aren’t just anyone’s mistake, they are ours. This means they are not just specific to your career or lifestyle, but also specific to our personal way of doing things and thought processes. No-one else will make the same mistake in exactly the same way. I’ll bet you won’t do the same thing again, either, particularly if you pay attention to how the mistake came about in the first place – using it as a learning curve. We’re all creatures of habit, and the same situation will almost certainly happen again, only with a wiser you at the helm.

Secondly, congratulations, you’ve just received a first-hand practical lesson in ‘how not to do it’. There’s something especially beneficial to learning by personal experience. It’s like the difference between reading a book about how to change a car’s oil and getting a one-on-one masterclass from a great mechanic. No book can better experience as an educator. And learning how to do something right by doing it wrong is a hard educational experience to top.

Thirdly and finally, you’ll have had to fix your error. This cements the lesson. By participating in the recovery, you’ll have analyzed the error in detail, even if it was subconscious. In fact, you’ve done far more analysis than you would have done if you got it right the first time.

So, when we have such a strong case for the concept that our mistakes may be our best teachers, why do so many people ignore these outstanding learning opportunities?

Each person’s reasons will be slightly different, but they are still potentially very expensive excuses.

Mistakes are a masterclass with the finest teacher if we allow them to be and, far from their purely negative connotation, they can be career and life-enhancing in the long-term.

In order to benefit from this opportunity, once you are aware of your error and after you’ve corrected it, ask yourself the following question:

None of us are perfect, and we all have and will continue to make mistakes. Nothing you can do will change this fact. The one thing you can change is how you respond to it and how it informs your future actions.

Just remember, those who maximize the value of their mistakes through learning from them are far less likely to repeat them, leading to less mistakes, and more success in future!