The Cost of Multitasking 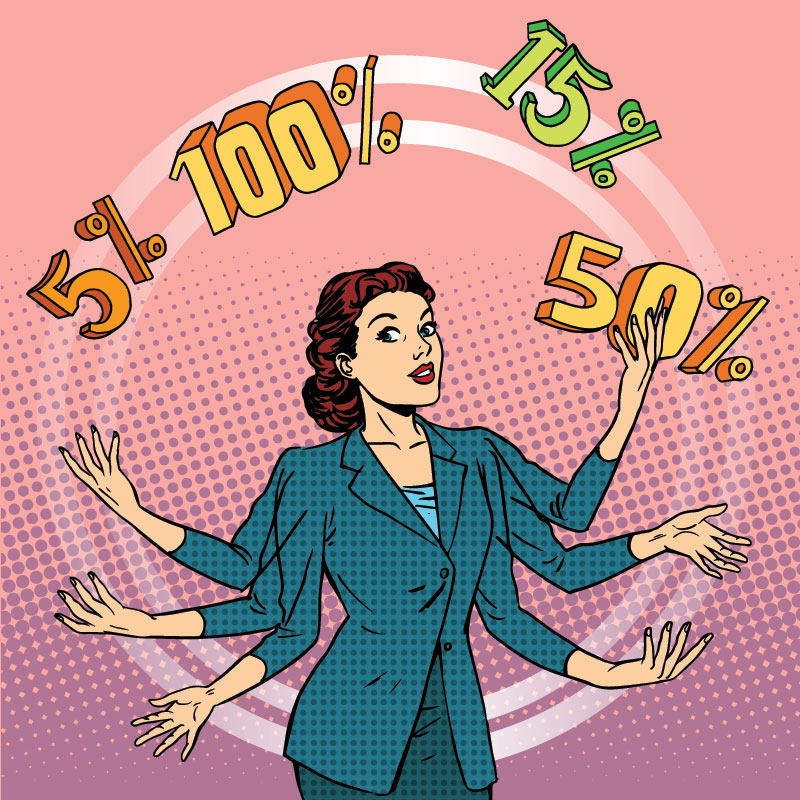 New research has some surprising facts on the modern-way workload. Sally Cleary explains…

As the demands of technology and social media in the workplace multiply, multitasking is becoming a bigger part of people’s jobs, according to new research from global recruiter Randstad.

The research also found that multitasking is now a requirement of almost nine in every ten jobs. Roughly one-tenth (11%) of respondents said their job did not require any multitasking while almost nine-tenths (89%) said it was part of their role.

The problem is that there’s a price to be paid for the growing number of interruptions employees face. According to a University of California-Irvine study, regaining our initial momentum following an interruption takes, on average, more than 20 minutes. Those working in HR were the most confident in their ability to get back on track after disruption, with an average of just three minutes to regain their groove, the lowest of all sectors polled.

The solution to the problems associated with multitasking

Randstad suggests two solutions to the problem. High-flying employees who want to maintain their productivity can change their environment to move temptation further away – shutting down emails, closing Twitter and Facebook, and silencing phones. And they can cluster similar activities together, keeping the transitional ramp-up time to a minimum. Instead of scattering phone calls, meetings, administrative work and emails throughout the day, they can try grouping related tasks so there are fewer transitions between them.

Going off-grid for half an hour will boost your productivity – it’s easier to concentrate when you’re not continuously fending off mental cravings to check your phone or have a look at your Twitter feed. Alternatively, you can read reports, articles and other documents one after another. Book in meetings back-to-back. And, if possible, try limiting email to two or three set times instead of responding to them the moment they arrive. HR professionals and in-house recruiters are used to being a touchpoint for colleagues and contacts, and devising a strategy won’t completely prevent people interrupting them – but it’s a start.

At present, few people are taking advantage of tactics like these. When Randstad asked employees if they ever change their environment to move the temptation to multitask further away, just 33% said yes.

High-flying A-players who are busy being successful will have figured out not only how to deal with the demands multitasking makes on their day but how to demonstrate that to potential employers in job interviews. Employers know how prevalent multitasking is and it frequently comes up in interviews and even job descriptions. The best way to convince an interviewer you are a great multitasker is to demonstrate that you are alive to the consequences and that you have developed sensible strategies to deal with the consequences of living in a multitasking world. HR professionals and in-house recruiters are used to being the ones posing the questions, but need to remember to show off these attributes when they are on the other side of the table.

With 22.76 million people currently working full-time in the United Kingdom[1], working approximately 253 days a year, the country’s permanent work force is now losing over 1bn working days’ worth of productivity every year as a result of multitasking. And these figures may well be similar in other developed countries.

Multitasking is becoming an increasingly important part of people’s working lives – 70% of employers tell us they regard it as important. That’s a problem because we all pay a cognitive price when we multitask – we deplete our mental energy every time we jump from one activity to another – and that price is soaring as multitasking becomes more prevalent in the workplace. The consequences are surprisingly serious when you take into account the amount of time it takes us to regain our flow following another interruption.

An experiment conducted at the University of London found we lose the equivalent of 10 IQ points when we allow our work to be interrupted by seemingly benign distractions. But when asked if they thought they paid a cognitive price when they had to drop everything and rapidly switch between activities, only 37% of the people who responded to the poll, commissioned by Randstad, said they did. And when they were asked to estimate how many IQ points they lost, they underestimated the effect by 50%, with the average answer being just 5 IQ points.

Employees are underestimating the damage multitasking can do to their productivity. If they saw how it impaired their IQ and how much time they were losing when they drop everything and switch activities and had to restart tasks, people would be more likely to look for, and adopt, solutions – especially in top-end job markets where the demands are largest.

The problem is employees don’t necessarily appreciate how hard multitasking can degrade their clarity of thought as it makes heavy demands on us. The research showed that HR professionals were among the guiltiest parties in terms of underestimating the IQ impact – not to mention the time wasted – that results from interruptions, so even those who are well attuned to matters of productivity aren’t necessarily aware of the extent of the issue.

Randstad’s research also found that just 23% of respondents did not enjoy multitasking – with 19% saying they don’t like it and 4% saying they hated it.

When asked if their colleagues appreciated how much multitasking was involved in their roles, only 41% of respondents to the survey said they felt their co-workers understood the amount of multitasking their job entails. This percentage fell to just a quarter of HR professionals polled, with 56% saying their colleagues were unaware of quite how much task-juggling their position involved.

There was also a gender divide when it came to perceptions of multitasking ability.

When looking at the overall results from both genders, HR professionals were the fairest of all sectors to the male of the species, with 13% considering them better multitaskers. The 56% who voted for women was lower than many other sectors and a quarter considered the sexes equally adept at multitasking.

83% of people think they are better-than-average multitaskers – they can’t all be right. The results also show that, far from being a myth, the perception that women are better multitaskers than men is a fairly universally held belief.