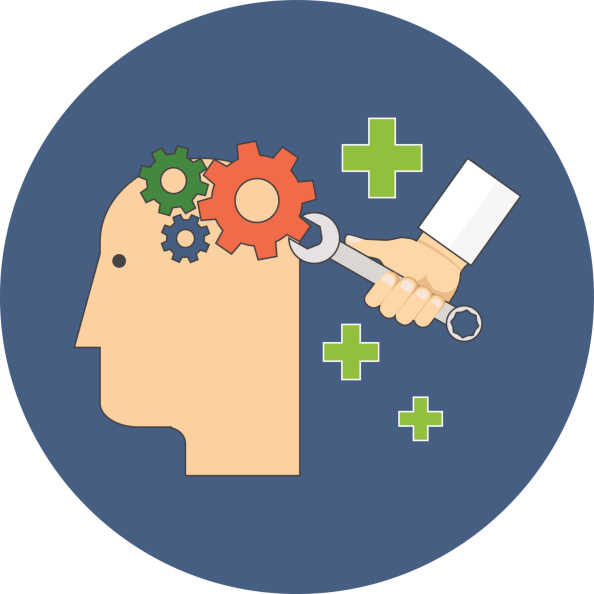 As a psychologist I spend time helping individuals, couples and families to resolve mind-based issues. This article describes some of the techniques that I use. My reason for sharing them with you is that the techniques are useful for everyone, whether or not you have an issue needing help from a counsellor, psychotherapist or psychologist, different terms that primarily reflect increasing levels of training and qualifications. (A psychiatrist on the other hand is a qualified doctor specialising in mental health issues requiring medication, such as bi-polar or schizophrenia).

Today the best known and most widely used therapy is Cognitive Behavioural Therapy (CBT). Most experienced and effective CBT therapists now combine CBT with an acceptance-based therapy such as Acceptance and Commitment Therapy (ACT), Mindfulness or Acceptance-Action Therapy (AAT). In my opinion AAT is by far the most effective of all the therapies I’ve mentioned, but that may reflect some personal bias, since I developed it. I also spend much of my time providing AAT-based development trainings to individuals via webinars, and to organisations via seminars.

CBT cognitive techniques involve highlighting distortions in thinking. Examples of such distortions include exaggeration, focusing on negatives, ‘black and white’ thinking (things are either good or bad) and emotional thinking (allowing our feelings to drive out thinking). Taking just one example, worry generally entails exaggerating both the probability of a negative occurrence and/or the consequences even if it were to occur.

CBT’s primary tool for challenging such distortions involves seeking evidence for and against negative thoughts. (We seek evidence to support negative thoughts to make the exercise realistic and credible, but clearly the ‘evidence against’ is the key change agent).

AAT takes a very different approach. AAT recognises that almost all negative thoughts (in fact 97% across the population) involve wanting something to be already different, which is wishing for the impossible. Either we’re wanting something that’s happened not to have happened or we’re wanting a situation that exists right now not to exist right now. In other words almost all negative thoughts involve wanting the past or present to be different. AAT calls this ‘resisting what is’. The more productive way to think is to stop wishing the past or present were different (called ‘accepting what is’) and focus on what we can do to change the future, including perhaps learning lessons from the past. AAT calls this combination ‘positive acceptance’. AAT has techniques to train people to be able to use ‘positive acceptance’ all the time.

The other 3% of negative thoughts entail worry, which involves wanting the future to be different from the way we think it might be. When we’re worrying we also believe we cannot control whatever we’re worrying about. So when we’re worrying, we want something that we have no control over to be a certain way. AAT says this is just about as ‘crazy’ as wanting the past to be different. We instead need to think about how we can get more control over the future and, if we can’t, then we need to ‘accept what will be’. AAT advocates replacing worry with Doris Day’s famous expression: Qu’est sera sera …. “Whatever will be will be”. Adding the CBT tool of identifying exaggerations can be a helpful supplement.

Another aspect of ‘accepting what is’ in AAT, is learning to accept uncomfortable feelings (also a feature of other acceptance-based therapies such as ACT and Mindfulness). Learning to accept such feelings is a hugely helpful ability to develop. It has a number of benefits. It makes us ‘OK’ about experiencing uncomfortable feelings. It diminishes those feelings. And it makes changing ‘feeling-driven’ behaviour much easier (discussed below).

One of several AAT tools for helping us to ‘accept what is’ (i.e. to stop wishing the past or present were different) is ‘determinist thinking’. This recognises that we and others have always done the only thing we could have done at every moment of our lives to date. While this may seem surprising, the reason for it is remarkably simple. Our thoughts, choices and actions at any moment in the past were determined by only two things. The first was our situation or circumstances at the time. The second was who we were at that moment (made up of our attitudes or ways of thinking, our beliefs, knowledge, abilities, morals, values, strengths, weaknesses, unconscious programming, etc). At any moment our circumstances were what they were and we were who we were. That’s why we thought the way we thought, made the choices we made and so did what we did.

Who we are at any moment is simply the product of our entire life history up to that moment, including any inherited traits. So the only way we could have been a different person at any moment, and therefore thought or acted differently, was if we’d had a different history. Clearly that’s never possible. Even our history couldn’t have been different. It was made up of ourselves, and any others who may have influenced us, all doing the only thing we could have done at every moment.

Determinist thinking eliminates regret, guilt, self-blame and blaming others. We and others are still responsible for the things we’ve done but in a ‘determined world’ responsibility is only about what we do ‘now-forward’ in relation to any negative things we may have done in the past, e.g. deciding not to do it again, apologising to others we may have hurt and accepting any consequences, such as penalties, for the things we’ve done.

All philosophers and many others are well aware that we live in a totally determined world. You can put the name of any well-known philosopher, such as Bertrand Russel, or scientist, such as Albert Einstein, into Google with the word ‘determinism’ and see what they say.

The other good news is that the future is not pre-determined. It’s wide open to allow us to make of it whatever we want. An explanation of this apparent paradox is too involved to provide here. For now, you’ll just have to take my word for it.

For example avoiding something that generates anxiety simply confirms to the mind that whatever it is that we’re avoiding must be threatening or dangerous, thereby maintaining or compounding our anxiety. The CBT cure it to stop avoiding the source of the anxiety. This sends a different message to the mind, unwinding the belief that’s driving the anxiety. It also enables us to discover that the thing we were avoiding wasn’t dangerous after all.

AAT uses the same approach but takes it further. AAT recognises that facing the source of our fear will immediately generate further anxiety. So in order to make it easier to face the fear, AAT provides tools to help us to accept uncomfortable feelings, in this case anxiety. Accepting feelings doesn’t just make it easier to change the behaviour. It also contributes directly to the resolution.

AAT recognises that whenever we do what any feeling is telling us to do, we always re-inforce the beliefs driving the feeling. This leads to one of the most powerful AAT tools called ‘accept the feeling, choose the action’, where the action needed to resolve issues is always the opposite of the unproductive action suggested by the uncomfortable feeling. This is just one of numerous ‘power tools’ offered by AAT.

One key difference between CBT and AAT tools is that CBT generally needs to be applied specifically to any individual negative thought or unproductive behaviour, whereas AAT is a way of thinking which, once understood and practiced, can be applied to any thought, feeling, behaviour or situation. AAT changes our whole way of thinking and, compared to other therapeutic approaches, therefore has a major impact on people’s lives that’s both wide ranging and permanent.

If you’re interested in learning more about these tools, so you can apply them to your own life, come to one of my free webinars that expands on the techniques mentioned above, and more.