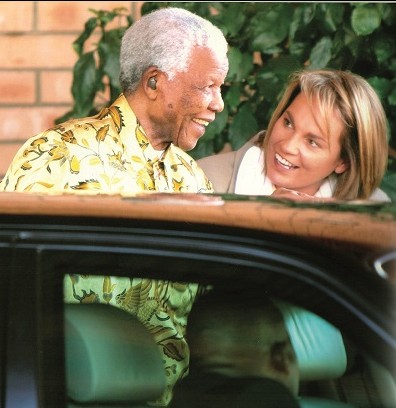 The first time a 20-year-old Zelda La Grange became aware of Nelson Mandela was when the announcement of Mandela’s impending release was made by President FW de Klerk in February 1990.

You didn’t need ask any more questions, you just knew it was a person who represented fear, who drove fear, who was a threat of some sort…”

So how did a young Afrikaner girl go from middle-class obscurity, and a blindly ignorant apartheid past, to become Mandela’s constant companion and honorary granddaughter?

Zelda spent 19 years winning the affection, respect and trust of the black man who was once the most feared enemy of her family but became, by global consent, the greatest political figure of our time.

She began work as an anonymous typist in the presidential office in 1994, having originally applied for a typist job in the economics department. But before she knew it, she had been appropriated by Mandela’s Private Secretary, Mary Mxadana, who was desperate for people who could type. She became a typist on the President’s personal staff.

It was just two weeks later that she bumped into him for the first time when she popped into his office to pick up a document.

“They say that to speak to the heart of a person you should speak in their language. The first time I met Madiba, he put out his hand to shake mine and spoke to me in Afrikaans. He asked me about myself and his kindness was overwhelming. I was so emotional that I cried uncontrollably.”

He told her she was overreacting but La Grange says that she was scared of him, not knowing what to expect of him, whether he was going to dismiss her or possibly humiliate her.

“Instantly it was that feeling of guilt that all Afrikaners carry with them… He was 75 at the time, and you could see he was old and the thing that immediately crosses your mind is, ‘I sent this man to jail.’ My people sent this man to jail! I was part of this even though I couldn’t vote. I was part of this, of taking from a person like him his whole life away. And then I started crying. And then he shook my hand, and he held my hand.

“After a few minutes I settled down, maybe smiled, and then he started asking me questions. Where had I grown up? What my parents did? We ended up talking for about five minutes. But it wasn’t special treatment he was giving me. He would talk to all members of the staff, black and white, in the same way when he met them, asking them about their backgrounds, their families…”

Her big break came in 1995 when he asked her to go to Japan with him.

“I went into his office one day to serve him tea and he said, ‘I want you to go to Japan with me.’ I didn’t understand much about the mechanics of government then, to say the least, and my response was, ‘Thank you very much Mr President but unfortunately I don’t have money to go to Japan!’ And he just burst out laughing, because I was so naive.

Then he said ‘No, no you go and see Professor Gerwel [the director general of the presidency], he will explain payment and protocol to you.’ It was obviously, as I understood later, a case of Madiba [the honorary tribal name by which Mandela is largely known]being the great strategist that he is. He knew it was important at that time to show the world we were going to embrace all cultures, we were going to have white people working with us.”

La Grange believes that if someone believes in you, you need to take that forward. “Madiba was the best coach and mentor. As a female Afrikaans-speaking person in the Office of the Presidency, I endured my fair share of criticism. One day Madiba said to me: ‘If you’re going to be a coward, you’re not going to last in this office.’ He always supported and believed in me and I’ve learnt so much from him. The way in which he deals with people who stand in front of him has completely changed my life.”

She went on to take on more and more duties for Mandela regularly working 18-hour days which left little time for any kind of life outside of the job.

“He started calling me to do more and more duties for him personally, to type letters, to be present at meetings, to take notes. Then in 1996 he insisted that I go with him on his state visit to France – still being the typist, but this time he did not take any of the other secretaries. I suddenly found myself having to perform the only secretary’s duties abroad. And this time I really had to work and learn how things were done, what a state visit consists of, what we have to do.

And after that I got more involved, with things around his private life, for example. And he would insist on me going here, there and everywhere with him – for example, when he went to visit a typical Afrikaner community, he wanted me to be there with him. In his eyes, I personified the typical Boer, and that was just fine with me. I was learning.

“My title was changed to assistant private secretary. As president he’d work very hard. He’d be up at one o’clock, two o’clock in the morning taking and making phone calls, sometimes right through the night and never catching up on lost sleep. I was always there, quick to respond. I could trace anyone on earth by telephone in a record time. It helped that I was at an age where I had lots of energy and no commitments other than my work.”

It was not a role that everyone could do – especially with all that hard work going unrecognised by Mandela’s adoring public. The press, rather unflatteringly, regularly referred to her as “The Rottweiler” because of her uncompromising protection of him. But La Grange says that’s just the life of an Assistant.

“You have to support someone, even if putting on the kettle will make his life better. It can’t be limited to a job description. I was quite content with serving him, because I could see how much my commitment meant to him and he inspired loyalty. I got the credit from him that I needed and that’s more than enough. That’s more than anyone can ask for.”

At the end of his Presidency, Zelda went with Mandela into retirement becoming his private secretary. In all, she was at his side constantly for 19 years.

It has been well documented that in the run up to his death in 2013, members of Mandela’s family blocked Zelda from saying goodbye properly. She had been fully committed to him, always had his best interests at heart and had even sacrificed several friends and relatives who couldn’t understand her unwavering loyalty to him. So two years after his death, having given up dreams of having a family, a husband or any kind of life outside of serving Mandela for 19 years, was it worth it?

“At the age of 23 I wanted to marry and have three children. I wanted three boys actually. But life will take you where you’re supposed to be. I had a choice – marriage and children or being part of history. I’m very grateful that I ended up having the opportunity to serve him. Regret is a useless emotion. It’s a ship that has sailed – and I’m quite content.”

These are sentiments she seemingly learned from Mandela himself, who she describes as “the most unbelievable boss”.

When he died, she released a statement saying that: “As sad as it makes me that I will never walk into a room again and see his generous, infectious smile or hear him say, ‘Oh Zeldina, you are here,’ I have come to terms with the fact that Madiba’s legacy is not dependent on his presence,” adding: “Thank you for believing in me, Khulu, making me a better person, a better South African.”