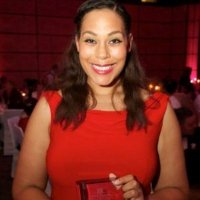 So I am 29 and live in South East London. My dad was in the army so I was born in West Berlin and as a child lived in places such as North Ireland and Canterbury in Kent. I moved to London when I was 12 and have lived in South London for the past five years.

I began my working life as an office helper for a small home-run estate agency when I was 17, I didn’t last very long there as it wasn’t a great working atmosphere. The business owners would lock me in the flat whilst they went out and about. I then went on to work as a receptionist for a variety of organisations; a dodgy gym, a mirror-making factory and a publishing firm. My last reception role at an energy trading firm was where I moved in to an HR Administrator role. I was lucky enough that they paid for me to get my foundation CIPD qualification in HR.

A life in HR wasn’t for me though and I missed the interaction of reception and being the go-to person. I was also suffering from depression and realised that I was in a place that wasn’t helping me get better, so after a trip with my best friend to New York in 2008, I decided to quit and get back on the right path.

I temped for a while and then found my first PA role: PA to the HR Director and team at the Arts Council England. A two-month contract turned in to two years before I decided it was time to take the next step. My next role was as PA to the HR Director at the British Library. Because of my HR background it was easy to put me in a HR based role but it wasn’t where I wanted to be.

It is well documented that you have suffered from severe depression in the past. What would you say were the key lessons learned from this period in your life?

There have been some very dark days for me in the past and there is nothing to say those days won’t reappear if I don’t look after myself and my health, physically and mentally.

In my worst bout of depression I let someone make me believe I was nothing, deserved nothing and had nothing. I knew deep, deep down this was wrong yet I didn’t have the strength to stop it. The realisation that came to me as I stood on the train platform, contemplating ending my life was that this was not normal and I needed to get help. I think that was the first time I had ever asked for help and it was hard, but as time went on I realised that if I wanted to progress there would be times when I would need to ask for help and there is no shame in that.

I’ve also learnt that having depression is not a weakness. It’s a medical condition with triggers and symptoms, and when I am starting to feel down, or sliding into dark thoughts, it’s a sign that I need to take a step back and remember how I don’t want to feel, and to feel the support around me and how strong I am.

You are best known as winner of the Executive PA Magazine/Hays PA of the Year. How did this come about and how has it changed your working life?

In the summer of 2012 I set myself some very clear goals for my ultimate happiness. One of which was to have the best job for me and to become successful in that role. Within two days of setting that goal I had a job interview for the role at ACEVO and a week later the job was mine. When I heard the nominations for the awards were open I felt this would be a great opportunity for me to test my goal of success (I hadn’t realised another colleague had also nominated me). I didn’t expect to get very far in the process but by taking the time to write up the nomination form I realised how far I had come and had already won at my goal.

Since winning, day-to-day work carries on, my boss still needs his life organised and the office still needs managing but I have been very fortunate to be asked to speak at various events aimed at PA and administration professionals, which has led to me travelling up and down the country over the past few months.

This has meant some time out of the office but I am always able to work remotely and therefore keep up with what’s happening in the office and my CEO. Luckily my CEO and Line Manager are very supportive. This is learning for me and also promotion for the organisation and our sector.

You are involved with setting up a network for Assistants who work in the third sector. Tell us a bit about this.

Over the past few months as I have begun to network more and more I realised that the number of Charity and third-sector PAs I saw at these events was very low. Getting to know your professional peers is so important for development and sanity. So I wanted to start to bring those of us working in support roles in the sector together. To help us develop ourselves and build the important relationships which help us to do our jobs.

There are very specialist networks out there like PACE which are fantastic and cater to the high level and specialist PA roles in the third sector, but nothing for PAs of all levels so the Charity PA Network now exists as a way to bring all of us together. We are mainly based online via LinkedIn but people can be kept up to date with goings on via Twitter and email.

My aim is to also hold quarterly networking and development events so we can put faces to names and really start to build those relationships, but for now this is a start.

Anyone wishing to find out more can email me at the following address: thecharitypanetwork@gmail.com or find us on Twitter and LinkedIn.

The fundamentals of the role are the same – support and enable – but I think the role has grown into something almost like a partner for our bosses. I would say many of us see our bosses more than our family and in some cases you almost become the family away from home for them. Our ears no longer just listen to dictation and budgets but also the woes and problems of our bosses.

Technology wise, it’s a hard job keeping up with all the advances the world seems to be making. Being forever contactable is another change that seems to have come in over the past few years. Having work emails on your phone or devices makes it so much harder to switch off and harder to say no: 9-5 jobs have become from waking up until bedtime jobs.

Seeing the success of my friends, families and peers and also seeing exactly what I can achieve with goal-focussed dreams really inspires and motivates me.

You don’t realise how many special people you meet every day and just by taking some time to listen to their stories and journeys you can’t fail to be motivated to make your own successes.

I am always surprised that people actually want to hear me talk but then I realise that I would love to hear and be inspired by their stories so why not the other way round.

There are many opportunities to develop ourselves as PAs at the moment but the funding to pay for that development is scarce. Not having training and development budgets can really hold some people back.

To counter this I encourage all PAs and Administrators to look for free opportunities where possible, fund themselves if they can but also not to be afraid of asking. You decide not to ask for fear of not getting but if you don’t ask you definitely won’t get. Don’t let fear hold you back

Find a mentor and/or find an ally. It can occasionally be lonely as a PA especially as PA to an executive so having someone you can talk to at work is vital.

Don’t be afraid to seek clarification on tasks you are not sure about. You may want to seem competent by not asking and just doing but actually you’ll look a lot more competent asking and getting it right then staying quiet and potentially getting it wrong.

So what’s next for Leeanne Graham? Where do you want to be in 5 years’ time?

Right now I am busy enjoying my role and “fame”. This is a great chance for me to build my profile so I am grabbing it with both hands.

Going forward, I want to continue working for the charity and third sector as a PA. I am a career PA so I want to keep rising and rising. I also want to work on helping other PAs develop and grow their careers too, so who knows, in five years from now I could be running my own PA training and consultancy business? The sky is the limit.