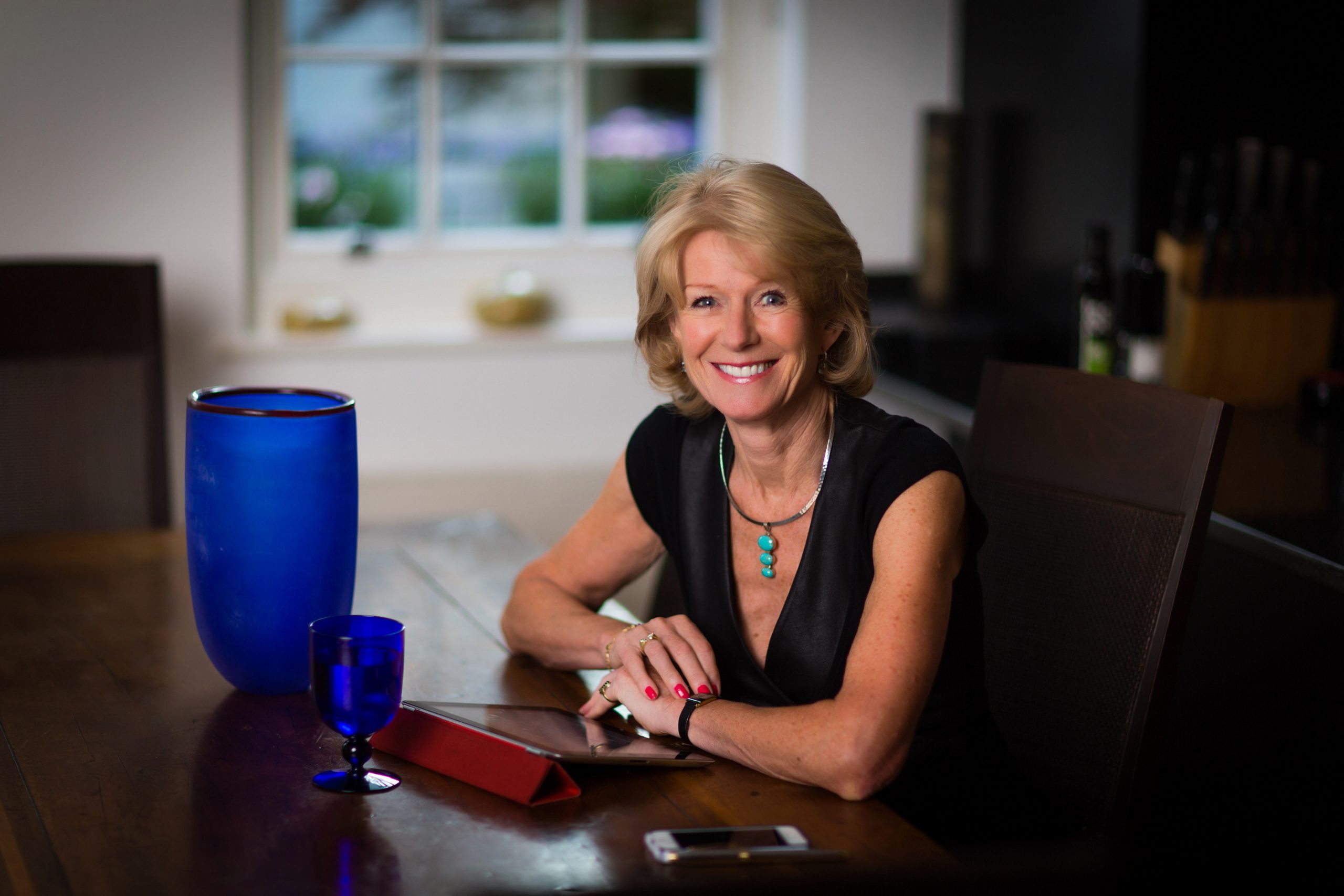 Angela started the company 40 years ago and has witnessed firsthand the changes that have taken place in the office environment and the evolution of the secretarial role during those 40 years.

Being blonde, a woman, and having a degree was unusual in Great Britain in the 1960s.  Training to become a teacher, nurse or secretary was considered enough to make a girl happy.  Sitting examinations gave me diarrhoea, but I had to go through it because academics, employers and peers would recognize the achievement.

My mother died whilst I was studying.  Bereavement counselling was unavailable and nursing a dying parent at home was tough.  My degree in Education covered motivational psychology, cognitive development and biology.  It helped my personal recovery and was to prove invaluable in my first and second career.

I loved the creativity of teaching and was happy till five years in I realized the upward route to Headship involved mainly administration.  To play to my strengths I had to change career.

‘And now for something completely different’, Monty Python style, was a good caption for the coming year spent trying to find my way.

Waitressing since the age of sixteen helped me fund a course at Sight and Sound to learn typing and speedwriting.   At night I managed a restaurant, in the trendy Kings Road.  It was a total break from the classroom.  The Rolling Stones, James Hunt and beautiful people came to dine dressed in “Carnaby Street” chic, kipper ties and platform soles.  As a requirement I wore along evening dress, usually an Ossie Clark.

Unlike the classroom, anarchy reigned in the kitchen and front of house.  Cheques bounced and wine left unlocked vanished.  One evening, a weary and disappointed international polo team threw their steaks on the floor.  I had learned enough about restaurant life – time to press the refresh button.

In 1971The Times newspaper was the best source for jobs and ‘Recruitment Consultant’; £2000 p.a. had a nice ring to it.  ‘Good with people’ was the essential credential.  I applied and started on Monday, promising to resist eating garlic and wear a bra in the office at all times.

We tested on the QWERTY keyboard, cruelly devised to prevent speedy typing from jamming the flying metal keys, like spaghetti, on the wet ink ribbons. We gave shorthand tests for Pitman’s New Era, a code of beautiful hieroglyphics, at up to 160 words per minute.  Shorthand was vital for verbatim boardroom minutes; later speedwriting took over, being quicker to learn.  Memos and letters were dictated in the morning and typed back in the afternoon.

I worked in secretarial and graduate recruitment for 5 years.  Consultants’ dogs slept under desks and excepting for one flatulent spaniel, it worked well.  I was trained to write coded descriptions of candidates that would be illegal today.  Clients registered jobs that were ageist, 35 being the pumpkin age when a person became not ‘quite right’.  They preferred to employ unmarried women.

Prime Minister Ted Heath’s battle with the miners in 1974 forced London offices to work a three-day week.  Electricity cut out daily at 3.30 pm.  Without heat, light or switchboards we wore winter coats, boiled kettles for hot water bottles and interviewed by candlelight.  Over the road, clients of Vidal Sassoon left with wet hair as hairdryers died.

I was the manager of Senior Secretaries when the owners sold out.   It was the jolt I needed to become self-employed, despite the frighteningly weak economy.  We opened our office in Foxglove House, 166 Piccadilly W1 on 28th August 1976.

My husband supported the enterprise, but I needed a soul mate at desk level.  Angela Orton, HR Manager from PA Consulting quit corporate luxury to join the ‘one man band’, nowadays dignified as a ‘start up’.  With her came humour, companionship and insight to make me brave against future threats and the downturns that lay ahead.

Our office was on the second floor to avoid drunks or ‘walk ins’ without appointment.  We had private interview rooms and test facilities.  We talked to clients about our candidates and delivered CVs by hand rather than stick on a stamp and run to the Post Office. Everything was up close, personal and quick.

In the 80s our best candidates gained 7 ‘O’ levels followed by a 1-year secretarial course.  Touch-typing, shorthand, bookkeeping, office administration and some law were included.  Typing was taught to music, slow at first then accelerated to the Flight of the Bumble Bee.  Leaving skills would be 120/60 wpm as a minimum standard.

It was usual in the early 80s for bosses and assistants to address each other formally by their titles and surnames in public.  The boss wore a pinstriped suit.  Company hierarchies meant there were never enough executives for the number of top candidates. A boss who took retirement would leave their loyal PA of 25 years challenged to find employment, her career in jeopardy.  For most top Personal Assistants their satisfaction was drawn from offering total support to the boss rather than their own personal development.

In 1986, the ‘Big Bang’ deregulation of the finance houses was followed in the 90s by a massive influx of American banks offering large salaries and hugely increasing employment opportunities.  This American boss wore chinos, used first names and adored our well -trained assistants.  They wanted highly educated, graduate staff and paid them generously.   The flat profile of their companies contained numerous Vice Presidents as individual profit centres, which increased the number of high-end opportunities for support staff.  They recognized that motivated graduate PAs increased productivity. The WW2 mantra previously directed at GIs – ‘They are oversexed, overpaid and over here‘ was revived as the old City names vanished in a flurry of mergers and acquisitions.

This rapid bubble of expansion culminated in an inevitable crash, with the supply of candidates outnumbering available jobs.   Many women chose this moment to take a career break and start families.  Returners from maternity leave in the late 1990s were dismayed by the technological changes.  Computers had replaced the golf ball and daisy wheel typewriters, and young graduates with brief office training had taken over.  We opened our own AM Training to supply the growing need.  ‘You are a Rolls Royce person with an Austin 7 engine under your bonnet!’ I advised one person.

Since 2000, IT has continued to experiment remorselessly on office workers.  Fax machines were overtaken by email.  Intermediate or advanced knowledge of systems superseded all else as a requirement.  Systems were replaced within months by better ones that had to be taught and learned.

Daniel Goleman published his book, Emotional Intelligence, in 1998, but it had ever been my approach to the interview.  Behaviour in the work place is key to matching a successful PA/boss relationship.  We encouraged each candidate to aim higher and each boss to create the best learning opportunity to keep satisfaction high and to aid retention.  This was a new take on the matching process, previously focussed on IQ.

“I want a PA more loyal to me, than to the company” confided the CEO of a multinational, “Someone to help me understand how my company functions”.   All bosses want to work with compatible attitudes, values and energy, to reduce their stress in the workplace.  Likewise, candidates want this compatibility.

Secretarial/administrative skills are a launch pad into more specialist and executive roles.  Many who expand their career into managerial roles find themselves returning to their original choice of EA/PA, finding more satisfaction and variety for their organisational skills managing one top person. They are highly paid, work 24/7 and enjoy the learning and challenge.

The 2008 crash has made it even more important to understand the culture of companies and the countries in which their Executives operate; the more autonomy given, the better they contribute and the longer they stay.  Most are graduates, still mainly female, many with two or more languages or a PhD.

When our Paris office opened in 1997 we witnessed companies everywhere fighting to win the best talent.   Many outstanding Executive PAs travel the world to find exciting work. In 1996 the first Moscow office of an American bank was opened by a young trilingual French national, educated in the States and interviewed in our Paris office for a London registered job.  Such travel patterns have become the norm.

Concurrently, some PAs from the University of Life have progressed to HR Business Partner of international firms or have been seconded to run their American graduate recruitment programme in New York.  The good can rise to the top.

PAs beat Artificial Intelligence aids because of the emotional support they give as well as insight into nuances and prioritising the ever-increasing deluge of information. Each economic downturn has found efficiencies by expanding the role of the assistant.

Recruitment is a powerful job carrying responsibility for positive outcomes. I am glad to have played a role in influencing the process and mentoring members of this vital and fascinating profession that keeps the world running.