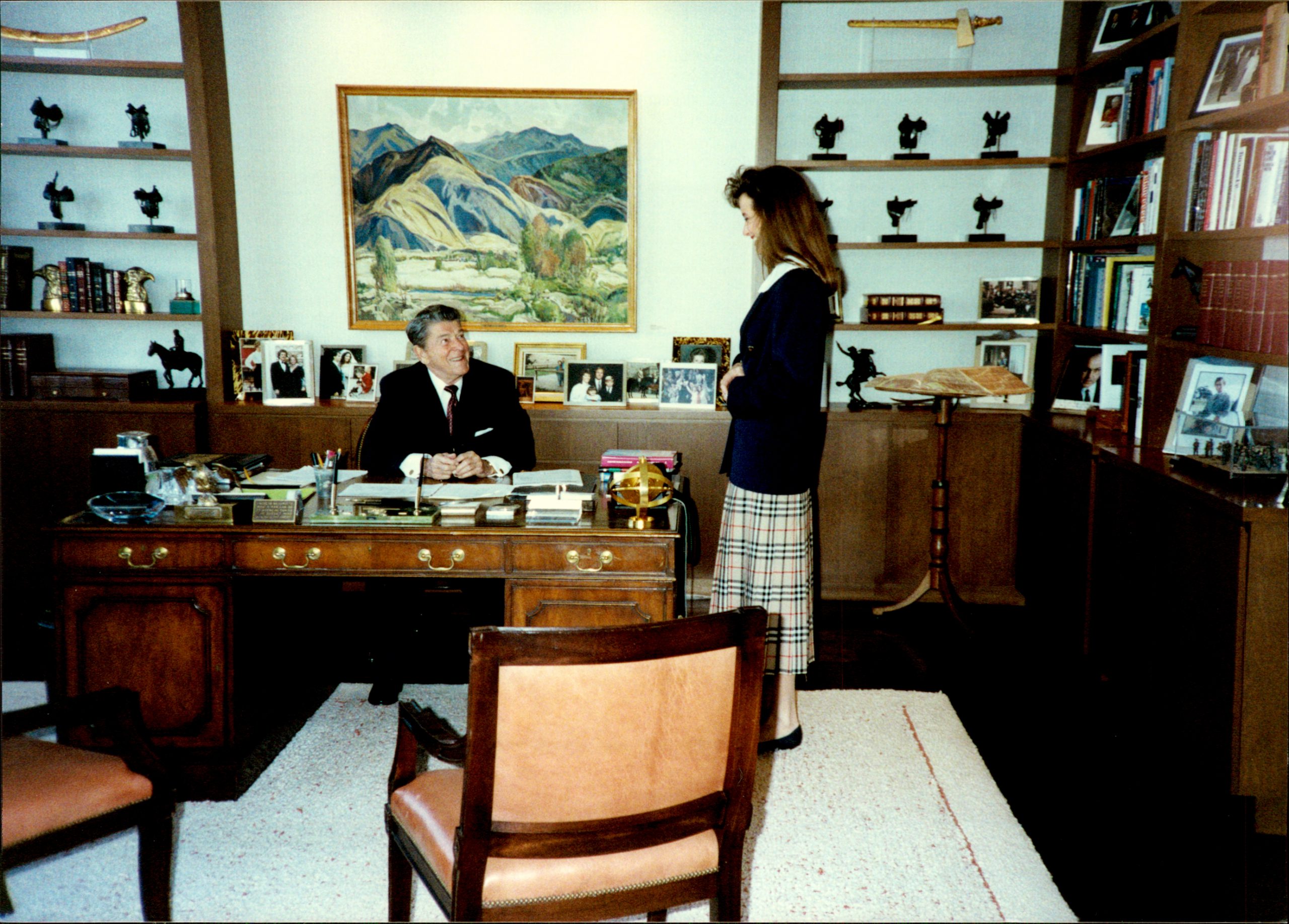 Peggy Grande worked in the office of Ronald Reagan for 10 years.  In this extract from her memoir “The President Will See You Now”, she gives us an insight into her daily routine

Getting to Know the Boss

Every day when I walked through the lobby of Fox Plaza to make my way up to the thirty-fourth floor, I entered the world of politics— the politics of the elevator. The other passengers in the elevator to the top floors were some of the most powerful and influential CEOs, attorneys, and financial advisors in Southern California. As we crowded in, my Nordstrom-trained senses would often detect the scent of expensive cologne on the men, spot the Chanel suits or handbags on the women, notice the turn of an Armani cuff on a shirt or the artfully constructed vents in the back of a bespoke jacket. Elevator politics played like poker. We sized each other up, daring someone to go all in. One man stepped forward, swiped his key card, and pushed the twenty-eighth floor, an impressive opening. The next slowly extracted the card from his jacket pocket, waiting to make sure everyone was looking, and raised him to thirty-one. Then I stepped forward and played my thirty-four, the equivalent of an elevator royal flush. My well-clad companions would take a second look at me, a young woman who looked much younger than her age, and would wonder, What is that kid doing with a keycard to the top floor—the president’s floor?

Often, in the beginning, I wondered that, too.

Yet as time went on I found my footing. I was responsible for keeping President Reagan on time, on schedule, on task, and on point. I not only had to keep pace with the president, but I was expected to be three steps ahead of him. And those steps had better be in the right direction since the United States Secret Service was also following along. I was young, yet I had to present myself as a voice of authority, even when I wasn’t always completely confident myself. The pace of life and business didn’t allow for the luxury of second-guessing, so it meant that I had to make many quick decisions and learn to trust my instincts. While my formal schooling ended with a bachelor’s degree in organizational communications and a minor in business, my informal schooling was ongoing, with a pace and intensity far greater than even that of my college years. From my prime observation point, I wasn’t just watching President Reagan but other leaders, too—of countries, of industries, and of companies—the best of the best.

I made it a habit to arrive at the office every day at eight thirty a.m., half an hour before the office officially opened, and ninety minutes before the president arrived. My desk faced the conference room, a formal seating area, and the doorway to the president’s half of the office. From there I could see everyone who entered that side. To the right was the chief of staff ’s office and his assistant’s desk, and just ahead of me on the left was the president’s office. To the side and behind me were huge corner windows showcasing the sweeping beauty west and south. I always wished I had more time to simply enjoy these incredible views, as they were truly spectacular!

When I arrived I would put my purse and bag down behind my desk and wrangle the pile of newspapers that waited there. The president liked to read the funnies first—his “dessert” before he got to the “main course” of his daily reading—so I would take that section out of the Los Angeles Times and refold it with the comics on top. Then I’d review his work folders. I had several legal-size folders I used to organize his work day: schedule, correspondence, signatures required, and other items requiring his review or follow-up. The folders were deep blue, embossed in gold with the presidential seal. I’d check to see that the items in the folders were in order and ready for him and would stagger them on my desk with titles visible, awaiting his attention. I would gather up his schedule folder, along with the folded funnies and the other newspapers, then turn to unlock the door to his office.

He liked a well-organized workspace, and I wanted his office free of clutter, so I did not put very much on his desk. I placed his schedule folder, containing his schedule for the day and the briefing papers in the order the events would be taking place that day, along with the folded comics section, in the middle of his desk. The rest of the papers were placed to the side of his desk, with titles showing—Los Angeles Times, Washington Post, New York Times, USA Today, and Wall Street Journal.

Then I filled his carafe with fresh water and replaced his glass with a clean one. When I opened the sheer pleated curtains to let the glorious Southern California morning sunlight bathe the room, it always was a happy moment. In the new light I’d assess the room, fluffing the cushions and pillows on his couch, straightening any pictures or items on his shelves or behind his desk that were out of place, and feeding the fish in his aquarium.

At about nine thirty each morning the staff would gather in the chief of staff ’s office to review the day and plan ahead. Around the time we were wrapping up our meeting, a Secret Service agent would arrive to tell me that the president was on his way to the office, giving me just enough time to set my things back at my desk, grab my keycard and some business cards, and head downstairs with the agent to await the president’s arrival.

His black Town Car would pull up to the elevator in the parking garage with a Secret Service vehicle in the lead and another one behind. When the cars stopped, the agents from both would jump out. If things were clear, the president’s lead agent, who rode in the front passenger seat of the president’s car, would get out and open the back door for the president. (Even when I was a passenger in his car, I was never allowed to touch the door. It was opened and closed for me, and I would await instructions as to when I was clear to enter or exit.)

As the president exited the car, he always had a huge smile on his face. He was happy to be there, happy to be starting another day, and happy to present me with the canvas White House bag from his “room- mate” (his quip for Mrs. Reagan), which I would take from him to carry upstairs. His lead agent, along with a few other agents, would escort him as he rode the escalator up from the parking garage and walked into the building.

The Career Behind the Job

The Benefits of Paralegal Training for Assistants

Moving into the Operations Manager Role