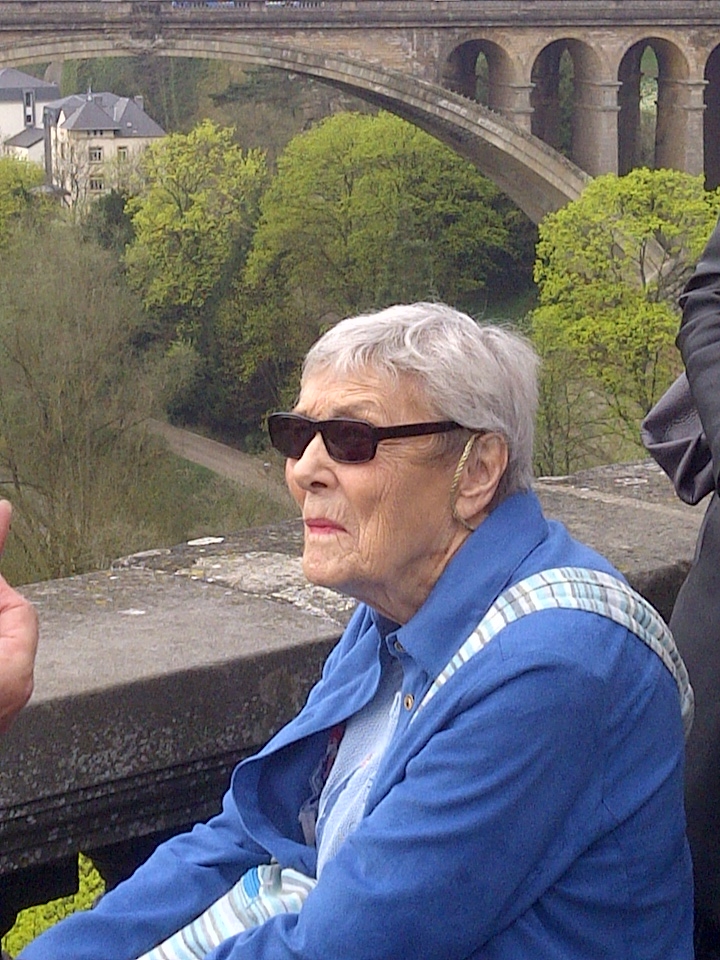 Sonia Vanular, the irrepressible Founder of EUMA, will be 90 years old this Summer.

In April, I was lucky enough to meet Sonia at EUMA’s Spring Council and Training Day in Luxembourg and she agreed to share some of her thoughts and insights.

Sonia – tell us a bit about your background

I was originally born in England and trained as a lawyer, although latterly I have moved to France. After my first husband was killed in the war, I went to work at St Godric’s College. My superior, who was very forward thinking for the time, used to send me to some of the Management Centre Europe events.

So how did EUMA begin?

In 1971 I was invited by the Management Centre Europe (MCE), a subsidiary of American Management Associations, to chair their first seminar for executive secretaries. This seminar had been run successfully in the US for many years. It was also successful in Europe and I chaired it on many occasions, during which time I met a number of very good secretaries from all over Europe. These people were very well considered by their own managers who sent them to MCE but they were not so well regarded by others. The image of the ‘secretary’ at that time was not very flattering.

As a former secretary myself I wanted to change this image and I thought it would be a good idea to create an association of top-level secretaries who would be able to prove to the world that being a secretary was a very difficult job, requiring intelligence, knowledge and many of the soft skills which managers often lacked.

I ran a follow-up seminar at MCE in the autumn of l972 and to this small group I gave my idea. Everyone was very enthusiastic. I got the go ahead from the head of the Management Centre Europe who was sympathetic and willing to assist us to get going. We held our first meeting in Bale, Switzerland in the autumn of 1973. Invited to that meeting were those who had impressed me during the MCE seminars. I wrote to twenty-five of them; about a dozen from nine countries accepted the invitation: France, Sweden, Norway, Finland, The Netherlands, Belgium, Switzerland, Portugal and England.

I had thought at the beginning that the Management Centre would do all the administrative work but in the end, although they were represented at our first meeting, they did not pursue their interest. It was left for me to continue the association on my own and it was lucky that I had recruited an excellent team at that meeting in October 1973.

What were the aims of the association at that time?

I was very pleased that one of the aims was to create a feeling of European fellowship amongst our members. This put us right at the heart of European thinking at that time. Great Britain had just joined the Common Market – it was growing – and secretaries were keen to understand more about how the development of Europe would affect the business world and their profession.

What was the new association called?

The European Association of Professional Secretaries (EAPS). We set up a Steering Group to consist of two people from each country represented, a National Secretary and a National Treasurer, with the responsibility to get a national group going in their own country. We later added a third person to the National Committees, the Public Relations Officer.

So, how did EAPS become EUMA ?

It became obvious in the early 1990s that the word ‘secretary’ was being phased out – many secretarial training colleges were closing. The secretarial role had changed dramatically. In l975 senior secretaries supported one senior executive and might be considered as part of the management team; by the 1990s most, albeit still senior secretaries, were supporting more than one manager. We did not want EUMA to look old-fashioned and realised we must change our name to something more in line with the way the secretarial role was going. At an AGM we changed the name to EUROPEAN MANAGEMENT ASSISTANTS (EUMA) putting Europe first as this was the trend with other European associations. Quite a lot of members were upset about the change and we lost a few of them as a result.

Despite the change of name to EUMA, have the aims of the association changed over the years?

No, the aims have stayed the same. One of my own aims in creating the association was to give secretaries more self confidence in themselves and their own abilities. I realised that one way to do this was to encourage them to speak in public, so in all our European meetings each National Secretary (now National Chairman) was expected to give a short presentation about what their groups had been doing that year. This experience helped members to feel more confident speaking in front of others. Today this ability is often part of a management assistant’s role. We have many excellent speakers in our group.

Overall, I am delighted to see that EUMA still continues to build up the self confidence of its members – if you think you can do something, you’ll do it. EUMA helps members to have confidence in their ideas, to share them and to motivate each other to do the things that they are not used to doing.

Why do you think EUMA has continued to be so successful after more than 36 years?

The secretarial role will continue to change but management will always need some type of support to help them get work done quickly and efficiently. The management assistant of today makes a significant contribution to the success of the company or department he or she works in. EUMA has helped this to be recognised. It has gone from strength to strength because we know the value and worth of the management assistant and have encouraged our members to develop their role and to be proud of their profession. We are a truly European platform. I am proud and privileged to have been part of EUMA for so long. It’s wonderful for me to see how the association continues to prosper after all these years.

So at 90, are you still involved with EUMA?

Absolutely – I still attend as many of the events as I possibly can. I spend a lot of my time now traveling both for work and pleasure. I very much look forward to seeing everyone in Barcelona for the training day in July.