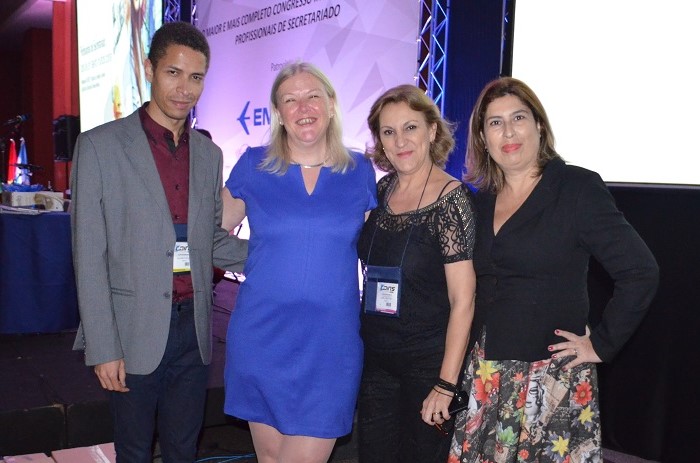 Eduardo Souza is the Secretary at the Association of Secretaries and Secretaries of State of São Paulo, Brazil

I was born in Porteirinha, a small city of the state Minas Gerais (Brazil), in 1986. I lived for some years in other cities of the state (Divinópolis, Montes Claros e Viçosa) and 4 years I lived in Amapá (north of Brazil). Recently, I live in São Paulo and work as assistant to Isabel Baptista, President of São Paulo’s Association for Secretaries – SINSESP.

In 2012, I was awarded an annual scientific initiation scholarship from Conselho Nacional de Desenvolvimento Científico e Tecnológico – CNPq. In January 2013, among more than 30 candidates I was chosen to receive a three week scholarship at University of Salamanca (Spain). After that, I attended Academic Mobility ANDIFES in Federal University of Viçosa (Brazil) (2013-2014).

While I was studying at UNIFAP/Brazil (2013-2015) I was Strategic Adviser and CEO of ELITE Junior Company of the Executive Secretariat. I was interned in organizations: Embrapa Amapá, Fecomercio Amapá, Amapá Government and Federal Public Prosecutor (Attorney of the Republic in Amapá).

I also participate in the following groups: Core Strategies, Management and Organizational Studies (NEGEO/UNIFAP/Brazil) and Interdisciplinary Research Group in Secretariat (GPISEC/Federal University of Sergipe/Brazil). I am associate with the following entitie: Brazilian Asociation of Research in Secretariat (ABPSEC). I have scientific papers and several texts published in national and international newspapers/journals. My research interests are: Organizational Studies; Foreign Languages; Secretariat.

I always liked to work helping the people. In a certain way, to be an assistant, you need to like administration and assessoring. After concluding a secretariat course high school level, I decided to the graduation in executive secretariat, and then I become, according to the Brazilian legislation, a secretary.

You are best known as Assistant to Isabel Baptista, the President of São Paulo’s Association for Secretaries – SINSESP. How did this come about and how has it changed your working life?

My contact with Isabel began in 2009, when I was still living in Minas Gerais. After moving to Amapá, I had the opportunity to organize some events, and I invited her to a speaker. That happened in 2011, 2012 and 2014. When I finished the graduation in January/2015, she invited me to work for SINSESP and I could not refuse this proposal.

In São Paulo my life changed completely. Imagine that in Amapá there are 500 thousand people, and in São Paulo there are about 12 million. It is a drastic change. But I can’t complain. We have an excelente work environment and I do get along with Isabel. I like what busy life that São Paulo offers.

As Assistant to Isabel, you are very involved in the organization of the biannual COINS Congress. Tell us a bit about the Congress and how you feel it has impacted on your role.

COINS, an event managed by Isabel had its first edition in 2011. It is a Congress which larger objectives is to promote the networking, the technical training, to discuss current problems of the secretariat profession in Brazil and to know the particularities of other countries. In the 3 editions professionals from the following countries took part: South Africa, Angola, Argentina, Brazil, Canada, United States, Portugal and United Kingdom.

My role at COINS it is to promote the approach among participants, speakers and the organizing committee. That can happen as physically as virtually. I participate direct or indirectly of the organization this event since the first edition. Every year I notice that new experiences are joined and that I have new responsibilities. I like that challenge.

You are a great advocate of Social Media. What advice would you give an Assistant that doesn’t see the value in using it?

The social media has the basic function of connection people. If you, as assistant, use them for your networking, you are going to get good results, for sure. I take part in several of them (Twitter, facebook, Instagram, Linkedin), and it is always important to monitor them. This way you don´t lose the focus: meet new people and keep the relationships (personal and professional).

And it´s always good to remember: if you are using the social media professionally, avoid posting about your personal life.

The Secretarial carreers demands lots of disciplina, discretion and behaviour intelligence, and of course, lots of technical competence. Throught your carreer, it´s natural that you develop this habilities/competences, but it´s not easy. The organizational environment is changing fast. The flow of information and the emotions of the people we assist demand constant care. And I think this is a daily challenge.

The innovative ideas, usually, are a good ingredient for my inspiration. It´s always interesting to think outside the box and using innovation to answer old problems. And it motivates me when I have to face a new challenge.

My carreer as an assistant is just begun. I´ve been in this profession for only seven years, and I still have lots to know and learn. However, if someone is joining it now, I just have to say you are beginning in a beautiful profession.

In any profession, you need to like what you do.  This way, you will be successful and have lots of opportunities.

So what’s next for Eduardo Souza? Where do you want to be in 5 years’ time?

Beyond developing in my carreer as secretary/assistant, working in a multinational company, I would like to invest in the teaching carreer. I intend to take my Master and Doctorate degrees, and work in a State or Federal University.