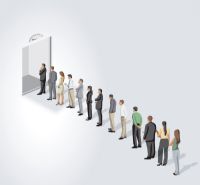 Succession planning in a business is always a concern. But for smaller firms, worries about cost, wasted time and internal politics can obscure a real need to prepare for the future…

Succession planning is all about ensuring survival. Lining up the next generation of people to run an organisation can ensure that a company continues after its original leaders have moved on.

But many small and medium-sized enterprises (SMEs) neglect to focus on this important issue, as they lack the dedicated people management of their larger rivals. And recent tough economic times have left many small businesses more concerned about whether their operation will survive to the next month or year than who will be in charge in the longer term.

This oversight carries clear risks. An unexpected departure takes on more significance the smaller the workforce, as the immediate talent pool from which to source a replacement is so much smaller and the potential impact is so much greater. The fact is, in an SME a key executive being taken out of action for whatever reason can deal a deathblow to the company.

This problem is one faced by companies in all parts of the world. More than half of small business owners in Canada have no succession plan, according to recent research from financial services firm Investors Group, while the New Zealand Institute of Economic Research has found that companies’ plans have become increasingly confused as older staff change their plans for retirement.

But SMEs complain that they lack the financial resources to tackle non-immediate concerns like succession planning. Others perceive such exercises as extra work, planning for an apparently unlikely scenario.

That fear is misguided, according to McCartney. “In fact, it’s easier for small companies to create succession plans because there are fewer people to deal with and skills gaps are easier to see,” she reasons. The cost of an external consultant is also an unfounded concern, she adds: “If you have someone with relevant HR experience, you can consider doing it within the business.”

Two-thirds of all new UK jobs from 1997 to 2007 were in companies with fewer than 50 employees. James Cullens, Group HR Director at Hays, says that the economic importance of small businesses demands better attention to succession planning.

“You don’t need to have a big HR department to address these challenges. It’s really the job of leaders and managers to answer some basic questions and put the business in a better state of readiness,” says Cullens: “Which roles are critical? What capability exists in them right now? Who are the potential successors and what am I doing with training or selective recruitment to ensure someone is ready when the time comes to fill a gap?”

Sophie Atkinson tackled it herself when she became Managing Director of UK-based vehicle cleaner, Autosmart International, in 2008. Autosmart, despite turning over £17.7 million in 2012 and employing around 100 employees, had no succession plan to speak of only four years before. She says: “I saw what other companies had done and came up with the review programme myself. It costs nothing but time and, now, if one of the key staff decides to leave, I won’t panic.”

Atkinson meets with each director yearly to check that the company still matches their career expectations. She says that regular monitoring means “I have time to prepare a replacement, and they have time to prepare a successor”. There is another benefit, she adds: “By redefining roles and objectives regularly, so if people leave, it’s clear what new skills the job needs now, and not five years ago.”

Somewhere succession planning can become particularly complicated is in family businesses. In Britain alone 100,000 of these enterprises are passed from one generation to the next each year and a third of these transitions fail, according to the UK’s Institute for Family Business.

“It involves an extra level of emotional complication,” says Sally Brett, Senior Adviser from the Centre for Family Business at global accountancy giant BDO. Many owners fear choosing between their children and don’t communicate their intentions. “We often hear from senior managers, asking what the business’ owners are going to do,” she explains.

A lack of action over an individual succession can mean other senior employees leave, unsure of their future, while trouble brews at the top. Simply put: “Unaddressed succession issues can fester,” says Brett.

She suggests that owners of family businesses in particular start planning well before there are any succession problems. “Draw up a written vision for the future and a succession plan that clarifies where family and non-family colleagues fit in,” she says. “It’s similar to writing a will and it may be hard to have that conversation between generations.

“It may help to bring in consultants or a non-executive director, but in all cases it should be someone who all the family trusts and respects. Encourage young family members to work and gain wider experience outside the business. Meanwhile the older generation must set a solid date for retirement – and stick to it. Brett says: “It means the next generation can come in, bringing new ideas that keep the business fresh and competitive.

“Whatever the business, succession plans can seem like an unnecessary and uncomfortably political chore. Avoiding these occasionally difficult talks, however, will only create a greater risk as the company grows and matures. With that in mind, in many ways, the key to succession planning is just to start.

CASE STUDY: Managing Growth and Expectations – ATC Group
“Succession planning is my primary task this year,” says Harold Vreeburg, Human Capital Director at global fiduciary group ATC Group in Amsterdam. “The group recently exploded, from 85 employees five years ago to 400 today. With such high growth, senior executives must begin managing the company rather than the processes, so new leaders must take over these tasks.”

That involves identifying key staff and asking who they consider to be their potential successors. “If they cannot identify someone, we must hire one or start training,” he says.

The successors are interviewed to check they are ambitious and want the job. If they do, expectations must still be carefully managed.

“We offer to develop the skills required, but point out that this does not guarantee the job – the current holder may stay for years or leave before the successor is ready,” says Vreeburg. “Of course there is the risk that we train someone who leaves, but it’s too risky to do nothing.”

The key, he says, is open, honest dialogue with employees, structured plans and regular reviews of the situation. “Done properly, when the time comes to appoint the successors, they will hit the ground running,” says Vreeburg.
“