I Am So Organised Because Of A Bump In The Road 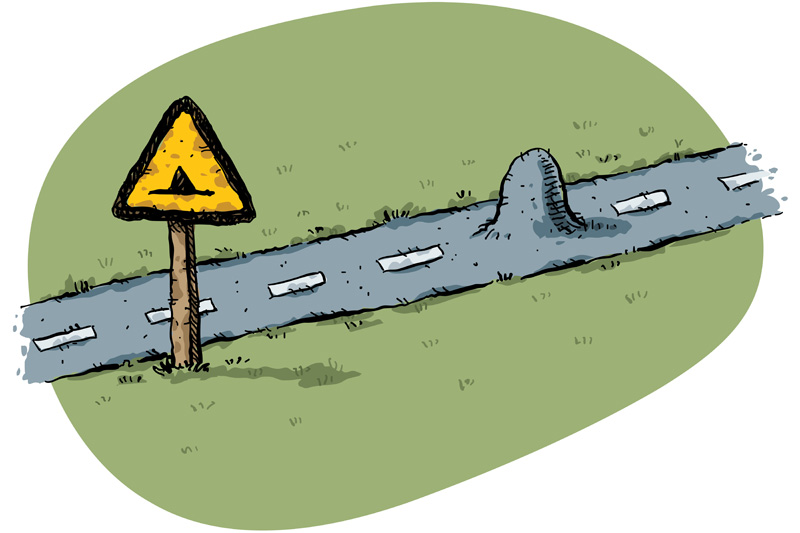 One Assistant wonders why all has gone quiet on the office front.

“Well, that’s another job done”, I think to myself with some satisfaction. It has been ages since I had time to sort out the hard files and archive older files. Electronically, my files are all organised so I can always find documents. Anything significant that comes in by post or fax is scanned in straight away and filed electronically. But my hard copy files are another matter! Its something that I tend to put on the end of the long finger. It is my one organisational weakness. My PA kryptonite! I just never seem to have the time to file away documents. Anyways, I can find anything in minutes electronically. Therefore, the hard files are not a priority. But, lately, I have managed to get most of my “long finger” jobs done.

“What’s your new found organisational methods?” I can hear you all shout! This took me a little while to figure out myself. At first I didn’t think about it, I was just working though my task lists. I was delighted that I was getting through my urgent and important tasks and then finally getting the lower priority work done too. There is something so satisfying about placing those completed ticks after each task!

But, after about a week or so of ticking off tasks and reducing my task list I started to think that something unusual was happening. My task list was reducing and meanwhile, very few new tasks were being added. What on earth is going on? How come my phone and email have gone very quiet lately? Where are all the colleagues asking for “favours” and help with various projects? One of the reasons I like being an Executive Assistant to the Chair is because I am not attached to any one division/ unit/ section so I get to help out and learn about the entire organisation. The downside to this is that I get called on for help by many managers! This can make my role very fast paced and varied. I could be helping finance one day and HR the next, then organising an event or meeting the following week.

But lately, things have gotten terribly quite. Is the economy downturn starting to seriously affect us in the public sector too? I had thought that the service we provide to the public would need to be done, whatever the economic climate. Certainly, up until a few weeks ago it was business as usual. I wonder if everyone in the organisation is also in a work lull. Perhaps it’s just a week of calm before the next storm? Well, I would have had the management meeting this week, but they have moved it from Thursday to Friday and I am off on Friday. Therefore, I am free from minuting this 3 hour meeting this week. As the agenda and supporting documents are normally only finalised in the hour before the meeting I can’t really help with the meeting preparation either. Come to think of it, I also missed the last management meeting as I was out of the office then too.

I have already offered my services to the managers, but they have no work for me at the moment. The quiet is unnerving now. So, I decide to subtly ask colleagues about their workload. The PR Officer is my first stop and she says that she is up the walls busy. In addition to her usual role in communicating with various trade and national press, she and a technical officer have even been asked to organise the logistics and facilities for a big event. Of course, she will also have to market the event and contain the usual media hype associated with such an occasion. This is strange. I am normally asked to do event logistics. Until casually speaking with the PRO over coffee I wasn’t even aware of the event. Why on earth was the PRO and a technical officer involved with organising registration packs and catering?

The next colleague I spoke with was in a more similar role and grade to me, as an administrative team support. She said that she was also very busy. So busy, in fact, that she had an application for 3 weeks leave turned down. In addition, she said that she has been asked by “The Executive” (my boss) to minute the next management meeting. This was in spite of the fact that she tried to get out of facilitating the management meeting as she has a number of pressing tasks to complete for her own manager. Once again, this meeting is something that I would normally do, but it was changed at short notice from Thursday to Friday – the day I have off on annual leave. Hmm, I wonder why they didn’t bring the meeting forward to Wednesday, when I would have been available? A quick check of the managers diaries shows a diary gap and that the meeting could have been held on the Wednesday.

Okay, this is starting to look personal now. For the last three weeks or so, I have been avoided, cut out of email correspondences, my work handed to other people and meetings changed at short notice to dates that I am unable to attend. In addition, various queries from me to my boss have gone unanswered. The type of queries that would usually result in a reply something along the lines of “thanks for the reminder, can you arrange X or Y”. WHAT IS GOING ON??

Have I annoyed my boss in some way? Did I do something that has displeased him so much that he feels like he is unable trust me to continue doing my job, or even talk to me about it? Perhaps he was searching for an original hard copy file? I look guiltily at the newly diminished pile in the corner. But no, he would have asked me to fetch whatever it was if he was unable to find it.

I think back to around three weeks ago to when all the strange behaviour began, and I wrack my brains for some incident that might have started all this off. I have that awful stomach churning feeling you get when you think you have lost something important like your wallet. I am really worried about this. I resolve that whatever it is I have done, I have to fix it. I will apologise and learn from the experience and never do it again. Surely The Boss will be okay with whatever it is I have done or not done? I have been working with him for 5 years! But I am unable to think of any incidents that may cast aspersions on my professionalism. I haven’t had any “heated discussions” with him or colleagues. I delve into my reading pile searching for the March 2012 Executive Secretary article about saying sorry, although, I am not aware of forgetting anything critical or menial. Wasn’t there an article in that issue about getting an appraisal too? The only thing that has changed is…but no…surely it cannot be THAT. Not is this day and age? Isn’t that illegal? But “it” is the only thing I can think of. About three weeks ago I told my boss that I was 4 months pregnant. Is this the bump in my professional road?”